*This* is an article I read last night about NY Governor, Andrew Cuomo, and his banning of “conversion therapy” for homosexual persons, which was identified as a notably religious, notably Christian, practice. I get that if a therapy is ineffective or harmful either as a whole or simply in the way it is executed, it probably should be stopped. But, Governor Cuomo made a very stirring statement:

“We will not allow the misguided and the intolerant to punish LGBT young people for simply being who they are.”

Obviously, I was peeved enough about the insinuating nature of that statement to write my thoughts on it, my incredibly long-winded thoughts.

I believe that a person’s sexual orientation is, in most cases, a product of the conditions of their environment, produced by a combination of the input they receive from that environment and of the way they respond to that input which (circling back around) will be a conditioned response. Some people may be born with biochemical imbalances that increase the difficulty to identify with the predominant norm, but there is at least a source for what all the statistics show to be a deviation from a clear and naturally intended normality.

Therefore, I believe that good can come from trying to psychologically bring a person in to line with the norm and away from their deviation. We do it all the time with alcoholics. We also practice such psychological engineering with patients ranging from serious addictions and lesser, though no less unhealthy, affinities. There may be a chance that some organizations who try this “conversion therapy” do so in a harmful way that wouldn’t just be bad for a homosexual who wants to change but also any substance abuser who wants to change. But that means there’s an issue with the problem solving mechanism, and not that the problem is some how not a problem. This means we must admit that even Christian “conversion therapies” can be done incorrectly in an unhelpful way (even though, logically, not all practitioners of such a therapy would have to be Christian. It’s just portrayed that way.).

But, allow me to take you on a survey of the situation using a Christian paradigm in an enchanted carriage known as “the extended metaphor.”

Addiction, particularly sexual addiction, operates by a method of parallel systems where proper use and improper use overlap. Suppose you are walking through a grocery store. Two aisles run parallel to each other. One is the cold/dairy/whole food aisle while the other is processed pre-packaged stuff. If you choose to go down the processed side you are still getting some of the things you’d find on the other aisle: the egg noodles have egg, the drink mixes have isolated and extracted versions of whole food qualities, the cereals come from actual cereal grains but are manipulated and sugar-infused. Some of the good qualities of certain foods are taken from whole food products in order to separate them from the “negative” qualities that would require a more active lifestyle on the part of the consumer, and others are entirely synthetic imitations of real food and flavors. You get the basic similarity between the two aisles–the calories–but you receive it in different ways depending on the aisle you choose.

The whole food aisle may require some additional work in preparation, assembly, consistency, and healthier lifestyle choices to accompany them in order to see changes in your person. However, consistency in doing these things makes them easier or habitual with time and can encourage better choices based on increased health and energy.

The other aisle, again, contains some of the same products but in an isolated, out-of-context sense. Processed foods presuppose that your lifestyle is rushed or can’t be bothered with preparation, assembly, consistency, and healthier life choices. Instead, processed foods promise those things to you through their product because they know that is what you’re looking for given the conditions of your life or your change-averse attitude. 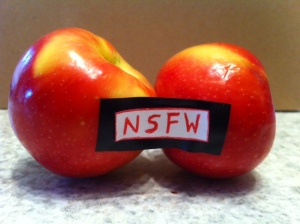 And that’s how applesauce is made. Additionally, I clearly have the maturity of a middle school male.

The problem is that, not only are the processed, out-of-context foods not giving you what you could be having, you are not going to make any changes to counteract the half-help that is your diet. Naturally, consistency in half-helpful choices makes your current choices for stagnancy habit forming and easier as well, since your decreased health and energy make better choices less appealing due to their progressive difficulty.

Out of context, the things both aisles share can affect your body differently. The synthesized version may cause complications of its own or may be manipulated to be more appealing and addictive so that not only is it bad for you, but it’s also something you want more of. Good things, when synthesized, can become easier for your body to take in so that your body is flooded with it faster than it can use it, therefore uptaking very little with each dose and chucking the rest so that your body demands more to meet the need it didn’t fill. This increase in ingestion also means an increase of the negative qualities of the synthesized materials and, still, no change to your physical lifestyle. It’s a bad decision that makes itself easier to repeat. You are engaging in the planned obsolescence of the nutritional world. Your McDonald’s Big Mac is the Apple Iphone of food. But at least it’s all gluten free, right? Some of those real grains aren’t.

We laugh when a particularly unhealthy friend says the cake they’re eating is healthy because it has milk, eggs, and grain “technically,” and we laugh because we are all (most of us) knowledgeable enough about the truth of the situation to know that some condemning, unhealthy details are being left out. Why is it that we suddenly freeze up when we’re not talking about our favorite foods anymore but the way we use our sexuality. You know, your brain fires some of the same basic neurochemicals when it registers a great taste or your favorite song as it does when…you know…you get busy “mix’n tha ingredients”.

Let’s be fair. The food metaphor isn’t completely in my favor. I grant that a person can grow fat from eating healthy foods just as well if they think that is enough without the accompanying life changes, much in the same way that a person  might unwisely pursue sexual expression through marriage hoping that the meeting of their sexual needs in context will be enough to maintain the relationship without doing all of the other necessities that come with married-ness. But I’m willing to admit that you can fall into the ditch on the right side of that proverbial road as much as you can the ditch on the left. Let’s at least talk about it.

We’re allowed to scientifically analyze the components of the foods we eat and make definitive statements from those results about whether or not those foods are healthy for you but not allowed to unemotionally hear both sides on the biological implications of sexual interaction?

We are allowed to entertain, advertise, and then rightfully joke about the individual that argues there is a ratio of exercise and a Krispy Kreme-centric diet that balances out to a healthy norm, or like some of my high school friends at one time suggested that you can technically get all the necessary calories for normal biological function from a counterbalancing regimen of booze and ice cream, but we’re not allowed to show any difference from the popular opinion that the pooper healthily doubles as much as a receptacle as it does an excretor?

When I vomit from an orifice primarily meant for ingestion of air or nutrients, it is okay to say that that deviation from normal function is a sign of bodily sickness whether it is bodily or psychologically induced. But, when I decide that I enjoy the insertion of another man’s phallus into an orifice primarily meant for expelling waste, I am told I have a sexual preference?

We are allowed to say, “you are what you eat,” and form nationwide lunch programs for government schools to try to make kids healthier by regulating decisions of consumption, but, in that same school, kids are taught in a nationwide program that their sexual preferences are so much a part of who they are that they shouldn’t be changed, regulated by anyone, discussed with the intention of change, or doubted by the child himself, herself, or their unidentified/unquantized self/selves unless he/she/they think they might be happier with another variety of sexuality?

Are we just acting like kids who want what we want without regard for the possibly better judgement of our elders, or perhaps stamping our feet all the more because now we want to get those old prudes to give in? If this is even remotely so, is this really the best mindset with which to approach Supreme Court decisions, state policy, and the forming of public opinion? As a parent, if you saw a kid at your child’s school acting this way would you set up a play date with them or give your child a preemptive talking to about why the things that kid is doing are harmful and not good?

If you feel so moved to answer any of these questions, the floor is yours, my dear and historically small readership.